Description - How Can We Visualize Resilience in the Real World?

The concept of resilience is often illustrated through the “ball-in-cup” model as illustrated in Figure 1. The balls in each diagram represent the current condition of the system (Gunderson 2000). Each cup or “basin of attraction” represents potential states or “regimes” in which the system can exist (for example, a desert, grassland, or forest). The ecological resilience concept recognizes that there is more than one basin of attraction (known as “alternative states”) to which the system may transition. The peak that divides two alternative states is known as the “threshold”. Ecological resilience is focused on quantifying how much “perturbation” the system can undergo before moving to an alternative state.

Over half of the world's grassy ecosystems are considered “disturbance-dependent” ecosystems, in that they require disturbance to persist long term and will transition to a woody alternative state in the absence of disturbances (Bond et al. 2005). In the Great Plains, fire suppression and introduction of Juniperus propagules in grasslands has led to regime shifts from grassland to a Juniperus woodland alternative state (Twidwell et al. 2013). 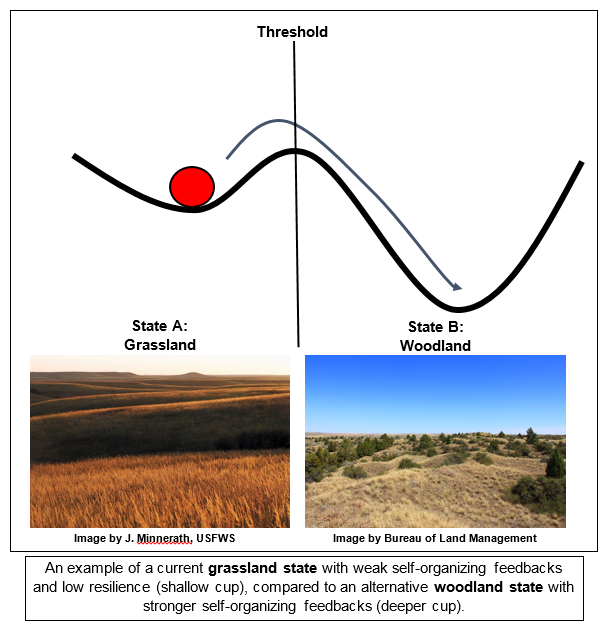