Plants of a single-cross hybrid are more vigorous than the parental inbred plants. In Figures 2a and 2b, the single-cross hybrid plant and ear are shown with the plants and ears of the parental inbreds. Clearly, the hybrid plant is taller and the hybrid ear is larger. The increase in vigor of a hybrid over its two parents is known as hybrid vigor.

Breeders often measure the degree of hybrid vigor of a trait with the following formula:

where Hyb = the value of the trait in the hybrid and

If a single-cross hybrid is allowed to open-pollinate (pollen is dispersed freely), each of the plants grown from the resulting seed will be genetically unique. To understand why this is so, first consider a single locus.  All plants of a single-cross hybrid are genetically identical, so at a single heterozygous locus any cross- or self-pollination occurring with open-pollination can be represented as:

One-half of the egg cells produced by each plant carries the A1 allele and one-half carry the A2 allele. The same is true of the pollen cells. The egg and pollen cells then combine at random during pollination. 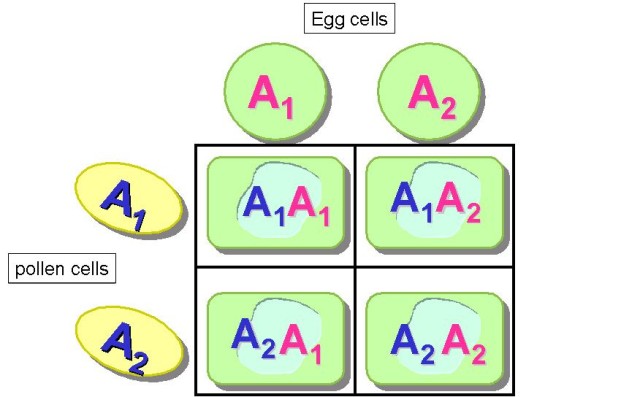 The A1A2 and A2A1 genotypes are functionally identical, so three unique genotypes can be produced at a single heterozygous locus when open-pollination occurs.

With two heterozygous loci, A and B, the situation can be illustrated as follows: 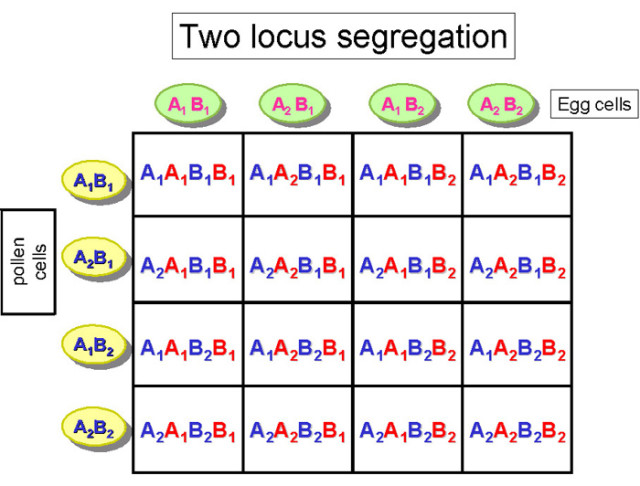 In the two-locus case, nine unique genotypes are produced. This occurrence of multiple genotypes among progeny arising from the self- or cross-pollination of parents that all have the same heterozygous genotype at one or more loci is known as genetic segregation.

The progeny produced from self-pollination of a F1 single-cross hybrid are known as F2 plants. On average, F2 plants will have vigor that is approximately half-way between the single-cross parental plants and the average of the two inbred grandparents; that is, half of the hybrid vigor is lost. This is illustrated in Figure 3. The F2 ears on the bottom row vary in size, but on average are larger than the ears from their inbred grandparents and smaller than the ear from their single-cross parent. That is why farmers have an incentive to purchase new single-cross hybrid seed each year.

Developing an inbred from a single-cross hybrid requires approximately seven generations of repeated self-pollinations (Figure 1). Each year in the United States, commercial seed companies produce hundreds of new inbreds and test in field trials many thousands of new single-cross hybrids obtained by crossing these inbreds. Compared to existing commercial hybrids, the vast majority of these new hybrids will be poorer or no better in performance. Only the hybrids that have superior performance in these trials are produced in mass quantities and sold as commercial hybrids to farmers.