Mechanism of Herbicide Selectivity:  Monocots and dicot plastidic ACCase enzymesare fundamentally different, and these differences create the basis for herbicide selectivity. The multidomain form of ACCase found only in graminaceous monocots is the only one completely inhibited by the ACCase-inhibiting herbicides, which allows them to specifically control certain weedy members of the Poacea, mostly in dicot crops. Further subtle differences between the ACCase enzymes from small grain crops (wheat and barley) and grassy weeds allow the use of selective herbicides like diclofop to control wild oats in these crops.

Much of our knowledge about plant ACCases derives from studies of their herbicide inhibitors, their mechanism of toxicity, and the mechanisms of evolved resistance. For example, investigations on the sensitivity of ACCases from certain grass families have provided detailed information on the different ACCase isoforms and their relative contributions to lipid biosynthesis. The ability of herbicides to specifically inhibit certain isoforms indicates that the plastidic form of the enzyme provides most of the lipids for membranes and cellular metabolism in the Poacea, as well as other plant families.

Dicots are naturally tolerant to ACCase inhibitors because their ACCase enzymes do not bind the herbicides.

Aryloxyphenoxy propionate herbicides: The aryloxyphenoxy propionate herbicides are informally termed ‘fops,’ reflecting the suffix on most of their chemical names. Fops were first developed in Japan and later in Germany, and diclofop-methyl was the first one commercially marketed in 1979. These herbicides are lethal to many grasses, with the exception of cultivated oats, wheat, red fescue, and annual bluegrass. Since most fops have very low water solubility, they are formulated and sold as esters. Once absorbed into plant tissues, the esters are rapidly cleaved to produce the free acids, which are the herbicidal form of the molecules.   The links to photos of herbicide injury symptoms were graciously provided by Dr. Jack Dekker, Iowa State University. 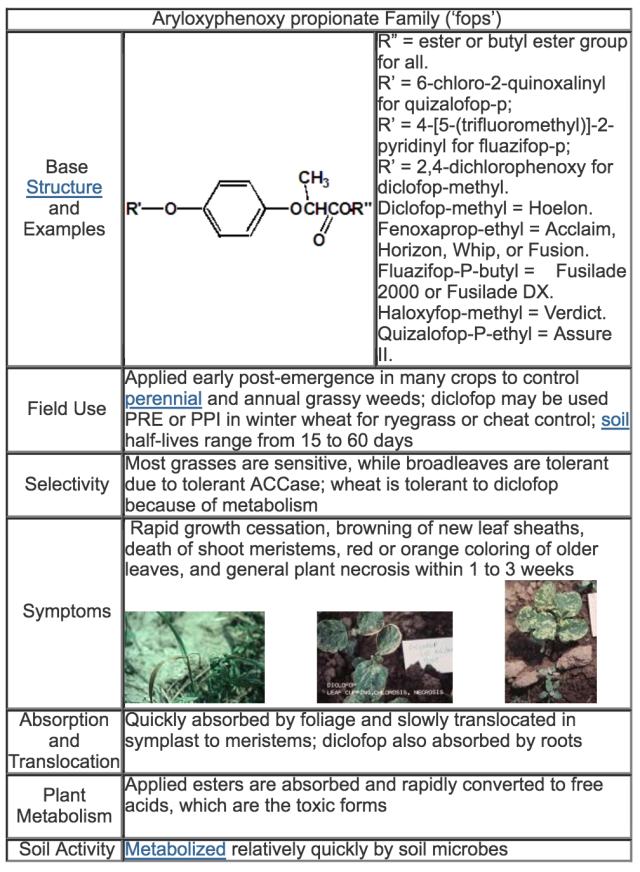 Cyclohexanedione herbicides:  The cyclohexanedione herbicides are chemically quite different from the fops and yet also inhibit ACCase.  These herbicides are termed ‘dims,’ reflecting the suffix on their chemical names.  Sethoxydim (Poast) was the first dim commercially developed in the early 1980’s, by BASF.   Unlike the fops, sethoxydim is very labile in the environment and in plants; however, many of the metabolites are phytotoxic and so herbicidal activity is usually retained. 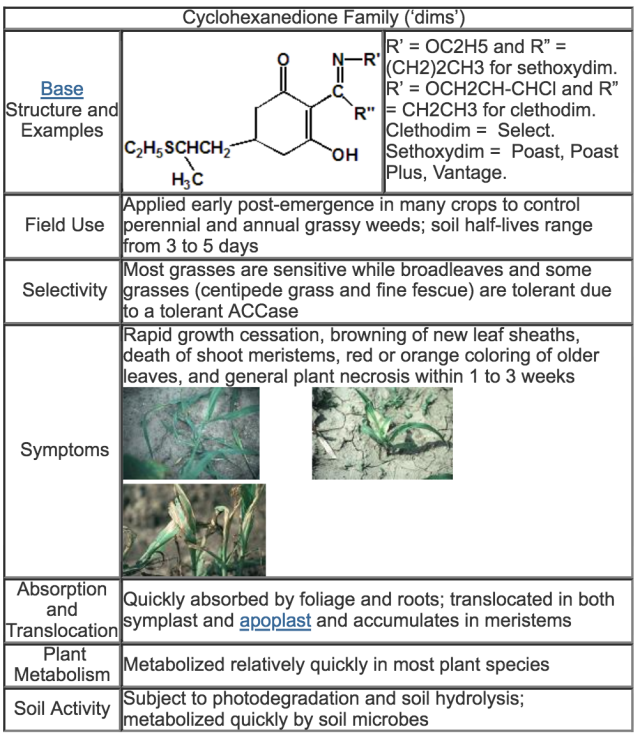 As is true for all herbicides, consistent or near-continuous use of these herbicides has selected for resistant individuals, which soon dominate local weed populations (Herbicide Resistance Overview).  In most cases, resistance to ACCase inhibitors is due to point mutation(s) in the gene encoding the target enzyme, which reduces its binding affinity for the herbicide.  Naturally herbicide-sensitive plant species contain an isoleucine at position 1769 of their ACCase amino acid sequences, while this amino acid is changed to a leucine in resistant biotypes.  This amino acid substitution has been confirmed for resistant wild oat and green foxtail, although there is some question of whether this substitution confers resistance to both aryloxyphenoxy propionate and cyclohexanedione herbicides.

Some resistant biotypes have been reported with enhanced levels of herbicide metabolism.  For example, Australian resistant biotypes of annual ryegrass (Lolium rigidum) are resistant to ACCase inhibitors and at least six other herbicide families.  Only two studies have compared the relative fitness of resistant and susceptible biotypes, and in both cases there appear to be no fitness penalties associated with the amino acid substitution at position 1769.