U.S. farmers spend over $11 billion on all pesticides annually, with 58 percent of that spent on herbicides, 28 percent on insecticides, eight percent on fungicides, and the rest on other agrichemicals. These figures illustrate that weeds are consistently the most important pests in agricultural production, and that herbicides are critically important tools.  While many researchers are striving to develop production systems using fewer inputs, herbicides will continue to play an integral role in most commercial agriculture in the foreseeable future.

Histories of herbicides (pesticides used to kill weedy plants) usually begin with the introduction of 2,4-D shortly after World War II, even though ‘natural’ weed control methods like rock salt were used in Roman times.  The use of synthetic herbicides began in the late 1940’s, with the wartime research and development of defoliants that led to the release of 2,4-D in 1946.

In the decades since then, about 270 herbicidal active ingredients have been commercialized.  These products represent 17 mechanisms of action, or biochemical target sites (usually enzymes).  Grouping herbicides by mechanism of action provides a convenient and useful classification system that we will follow in this course.  Interestingly, about 50% of the 270 compounds act on one of only three target sites: acetolactate synthase, photosystem II, or protoporphyrinogen oxidase.  This information leads to an obvious question:  why do herbicides only act on a relatively tiny number of all the potentially lethal targets within a plant?

This lesson will explore this and related questions, including where herbicides come from and how they are developed.  Figure 1 shows an overview of these processes for herbicide discovery and screening. 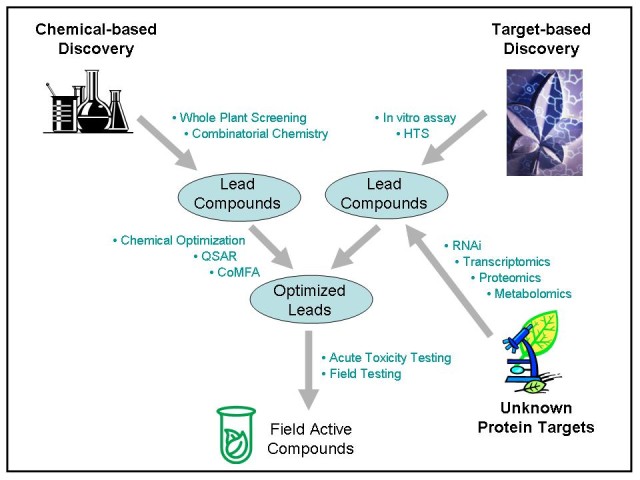