Why a Triplet Code?

Prior to understanding the details of transcription and translation, geneticists predicted that DNA could encode amino acids only if a code of at least three nucleotides was used. The logic is that the nucleotide code must be able to specify the placement of 20 amino acids. Since there are only four nucleotides, a code of single nucleotides would only represent four amino acids, such that A, C, G and U could be translated to encode amino acids. A doublet code could code for 16 amino acids (4 x 4). A triplet code could make a genetic code for 64 different combinations (4 X 4 X 4) genetic code and provide plenty of information in the DNA molecule to specify the placement of all 20 amino acids. When experiments were performed to crack the genetic code it was found to be a code that was triplet. These three letter codes of nucleotides (AUG, AAA, etc.) are called codons.

The genetic code only needed to be cracked once because it is universal (with some rare exceptions). That means all organisms use the same codons to specify the placement of each of the 20 amino acids in protein formation. A codon table can therefore be constructed and any coding region of nucleotides read to determine the amino acid sequence of the protein encoded. A look at the genetic code in the codon table below reveals that the code is redundant meaning many of the amino acids can be coded by four or six possible codons. The amino acid sequence of proteins from all types of organisms is usually determined by sequencing the gene that encodes the protein and then reading the genetic code from the DNA sequence. 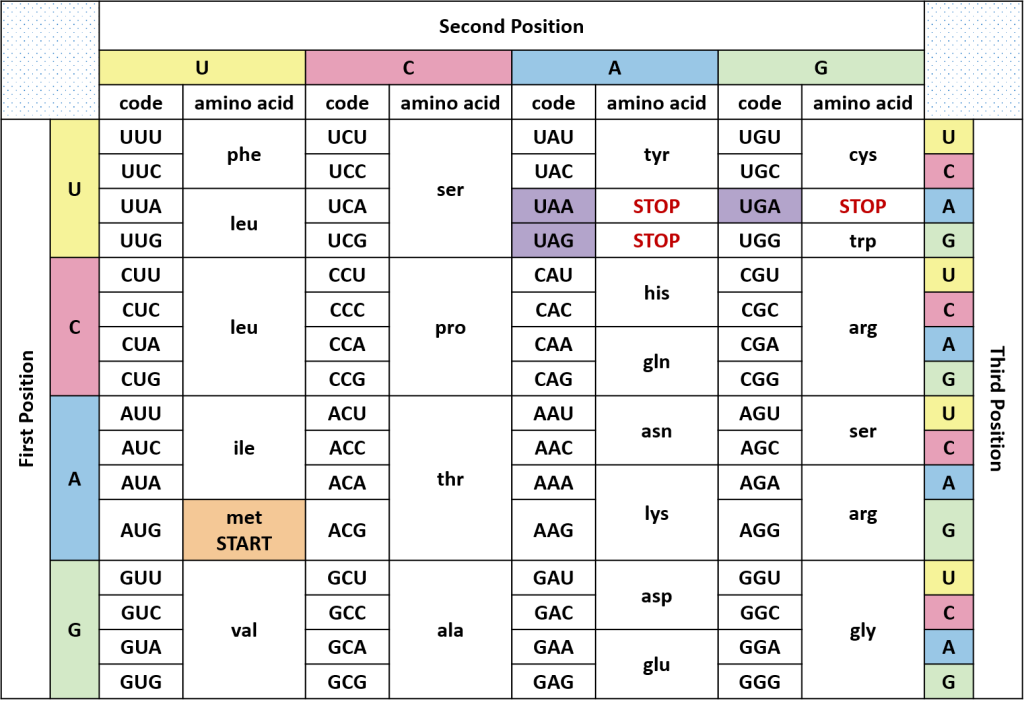